Selling chocolate, having spaghetti dinners and other fundraising activities are all great, but their reach is limited! Why not add crowdfunding and take your fundraising to the next level? Your players will be more motivated to fundraise for your team using cutting edge tools and their daily social media. Once your campaign is launched (if you don't have a running campaign, create one here), here are 3 tips to optimise your crowdfunding campaign and get the most out of it:

Create individual campaigns for each one of your players to boost the performance of your team. Once every athlete has a campaign your fundraising will be supercharged. With the power of social media, every athlete and a parent will be able to reach out to their own circle of friends, family members, fans and supporters. This is simply not possible with selling chocolates. Below you can see members of the same team: 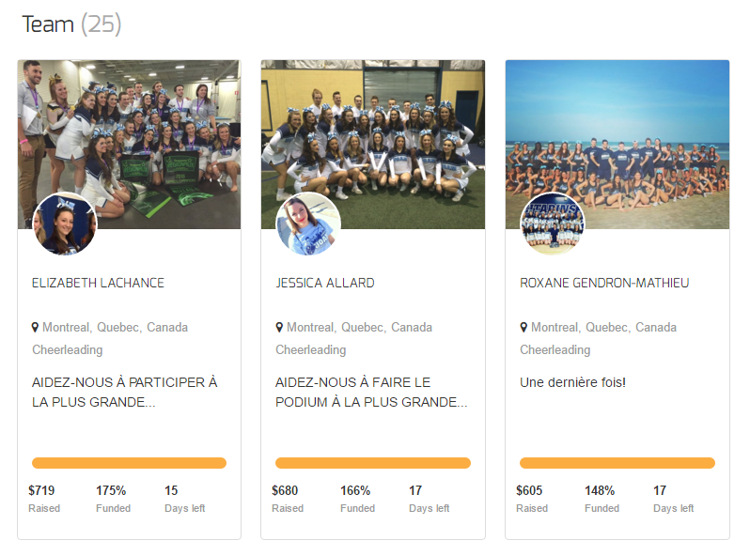 2. Play And Fundraise A Team

You are a team during a match, you should also be a team when fundraising online. Acting as a team on social media will make your crowdfunding that much more powerful :

a) The team as a whole, should thank individual contributors that have contributed to the individual athlete in the team. For example if a mother of an athlete has contributed to her son/daughter then the whole team should thank the mother even if it is not the other team member’s mother. When a player creates a post about his campaign on social media, the whole team should like and comment on that post. It creates more activity around the campaign and drives more traffic towards it.

b) When you make a crowdfunding campaign make sure you have an interesting and fun campaign. This will make your players more involved and more active in your campaign. A bit of humor would also be a great helping hand. You can get inspired by running campaigns.

3. Positive Rewards / Motivation and Much More

Here are couple of key elements that I’ve got from a little interview that I’ve made with Roxane Gendron Mathieu, who is the head coach of the cheerleading team of UQAM who are on their 2nd MAKEACHAMP campaign:

a) Motivation: each athlete has to have a goal and must be kept personally motivated. If an athlete is seen as struggling to raise funds, other team members can help prop him/her up by promoting his individual campaign.

b) If you can't accept losing you can't win:  in crowdfunding, if you don’t ask you don’t get. Preparing your athletes about the fact that they will get no’s sometimes is crucial but they have to keep in mind that receiving a no is better than not asking at all.

c) Create a game plan: even before the campaign launches, make sure that each player has 1-5 people who they can ask to contribute directly to the campaign to start the ball rolling.

d) You are responsible for the campaign: if you are the coach of the team you have to make sure that team members thank all the contributors at the end of the campaign.

e) Inspire the crowd: Give contributors and fans access to material that isn’t visible on your Facebook page and make them feel as if they have special access to the team using the campaign updates.

I hope that you this has given you some good ideas for your next campaign or for your current campaign. Do not hesitate to start your campaign here or to be inspired by teams who are presently running campaigns. Our team is always available to assist you at whatever stage so do not hesitate to contact us.

Climbing to the top one step at the time

10 Quick Tips for Promoting your Campaign