MAKEACHAMP is a global company, so it should come as no surprise we’ve got a fast-growing international team that’s tripled in size since we started. Based out of Montreal, Canada, we live and breathe crowdfunding and sports. 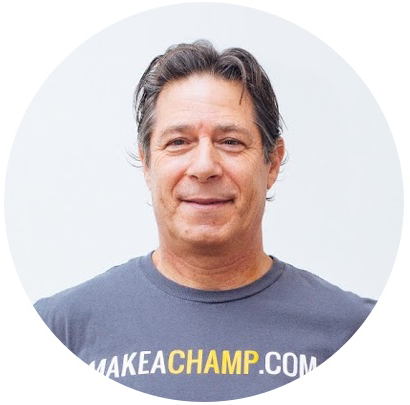 David overlooks the management of the company. He also manages the budget and the financial side of MAKEACHAMP. David spearheads the business development and leads the expansion and global strategy of MAKEACHAMP. He is a veteran entrepreneur with over twenty five years of experience having been successful as Co-founder of Simbionix and that sold for 120M$ USD. Before joining MAKEACHAMP David has worked extensively in the medical field with Immersion and CAE Healthcare where he was Vice President.

David studied History at Université La Sorbonne in Paris. He speaks English, Arabic, French and Hebrew. David continues to represent Canada at Judo Masters level. In his spare time he is a massive bookworm and is an avid cook. He claims to have watched the Big Lebowski over one hundred times and follows passionately the Montreal Canadiens Hockey Team. 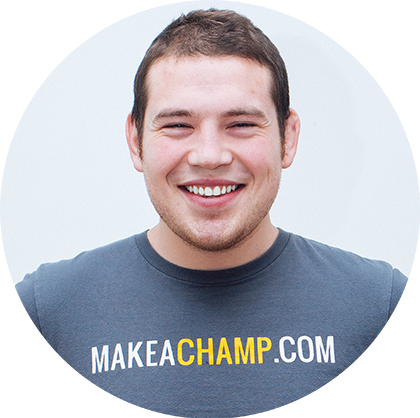 Michael is one of the Co-Founders of MAKEACHAMP, he founded it back in September of 2012. He is the lead technical developer and talent behind all innovative new services. Michael handles all the R&D efforts involving Big data technology. Programming runs in Michael’s life, he built a website at 10 years of age.

Besides his Russian roots, Michael has Tatar roots from Kazan City, which is in Tatarstan in Southern Russia. Michael also has an impressive linguistic resume, he speaks English, French, Russian, Hebrew, PHP, C++ and Java. He has experience in Website Marketing Automatization. Michael is a self described artist from Montreal,Canada and in his free time he still takes part in judo and competes nationally. Also he enjoys fishing and playing with his bird and dog. 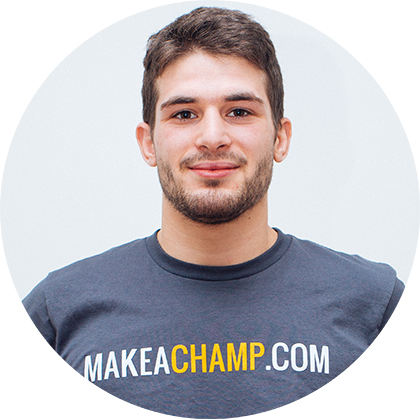 David is one of the Co-founders of MAKEACHAMP. As Athlete Ambassador he promotes MAKEACHAMP through the various sporting events that he participates in. Currently David is attempting to be part of Team Canada for the 2016 Rio Olympics in judo. Since 2015 David has been dedicating his time as a judoka. He is MAKEACHAMP eyes and ears around athletes in the market.

David has both Georgian and Azerbaijani roots. He studied Psychology at McGill University in Montreal,Canada. He is fluent in Russian , English, French and Hebrew. David is an accomplished soccer player and enjoys watching soccer when he has some spare time on his hands. He is also a cat lover and likes to play with them. 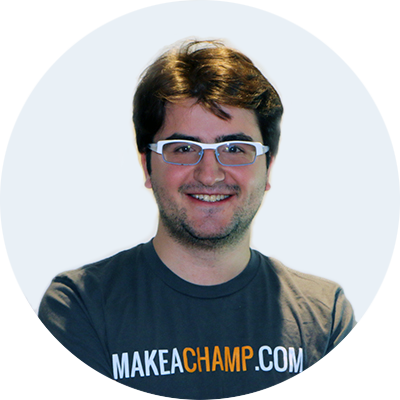 Raphael is in charge of our social media platforms such as Facebook, Twitter and Instagram. He promotes MAKEACHAMP through all our social media outlets. He posts updates regularly promoting athletes of the day and campaigns of the week. He also writes many posts for our blog with interviews he has had with some of the athletes. At McGill, Raphael was a regular contributor for the Sport Section for the McGill Tribune.

Raphael comes from London, England. He speaks French, English, Spanish and Russian. His Franco-Colombian background makes him a very open minded and multicultural individual that adds to MAKEACHAMP’s rich tapestry of cultural diversity. Raphael is a graduate from McGill University in Montreal, Canada with a Bachelor of Arts, majoring in History and a double minor in Economics and Russian. In his off time he enjoys working out and reading and watching Liverpool FC. 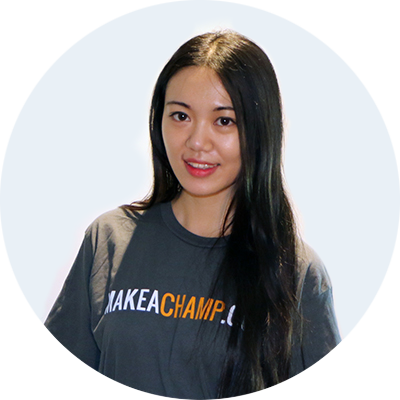 Jessie analyses our performance and harnesses data through that with which she can synthesize and make recommendations on how we can improve. Jessie provides informational support to MAKEACHAMP through careful market research and data analysis. She assists in business performance evaluation. She is very meticulous with her work and pays a lot of attention to details.

Jessie studies at McGill University in Montreal, Canada and has an academic background in economics and marketing. She is from Shenzhen, China and she speaks Mandarin, Cantonese and English. She is a curious and intuitive person with a strong interest to explore. Jessie is an accomplished pianist and in her free time, she loves travelling and kickboxing. 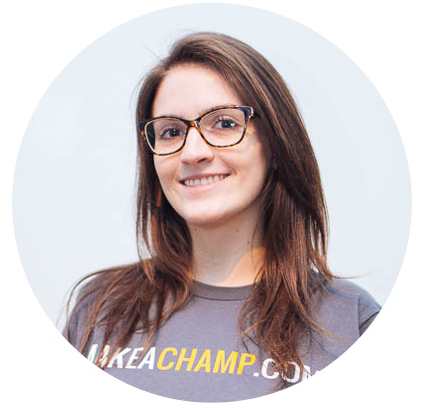 Claudia has a strong background in media and works with promoting and assisting sport crowdfunding efforts in South America. She also answers any questions regarding South American athletes and does some customer support with South Americans. Claudia has previously worked for companies such as SAP and Santo de Casa Endomarketing in Brazil.

Claudia studied at Universidade do Vale do Rio dos Sinos in Brazil and focused on advertising and marketing. Claudia is from San Leopoldo, Brazil. She also spent a year on exchange at the John Molson School of Business where she studied marketing. Claudia can speak Portuguese, French, Spanish and English. In her free time Claudia loves to explore new places. 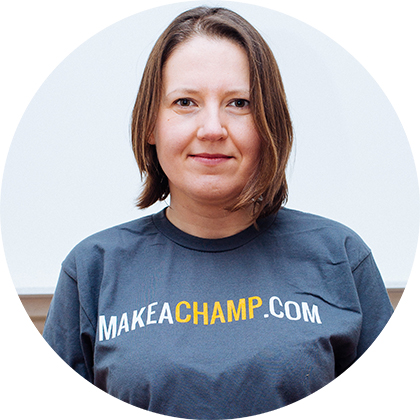 With 15 years experience in journalism, public relations and media production, Liuba supports Russian and Eastern European efforts in sports crowdfunding. Liuba is tri-lingual and she is able to speak English, French and Russian.

When she’s not introducing newcomers to MAKEACHAMP, she’s pursuing her passions for creative writing and photography. Liuba is very gifted in those two areas and takes a lot of pride in her two greatest passions. She is an avid reader as well and enjoys Russian literature, books from Pushkin is something she enjoys a lot.