Update:
Initially the inspiration for this post came from Loehr's book, The New Toughness Training for Sports. However, after falling on The Gold Mine Effect by Rasmus Ankersen, I've discovered a tremendous amount of research confirming and enforcing the power of mental toughness and positive thinking in achieving athletic excellence.

Why do we stop when exercising?

Traditionally (prior to the early 2000s), we believed that a decrease in performance is the result of physical fatigue - pointing to the the fact that less oxygen reaches the muscles, that lactic acid builds up and that our legs tire. The basis of this belief is that it is the body and its functions that determine fatigue and exhaustion and, therefore, the limit of our physical capacity. In the early 2000s, Tim Noakes, a professor of exercise and sports from South Africa, led fascinating research refuting this notion. He went on to spear-head a revolution in how the world of exercise science explained fatigue. He helped develop the Central Governor model that states that it is the brain and NOT the body (as we previously believed) that dictates how fast, how long and how hard you can exercise. This is huge!

To give you an example, imagine you went on a 5km run. At some point of that run you would start to feel fatigued. Traditionally we would assume the cause of this fatigue is the build up of lactic acid in the muscles and the resulting chemical changes in the body. However, with development in sport science, we are now beginning to understand that it is actually the brain that is causing you to feel exhausted. The brain's function is to protect itself and as a result it is trying to stop you from pushing yourself beyond your abilities and damage yourself. By giving you the feeling of fatigue, it is how to brain is putting on the breaks in order to "increase survival". However the reality is that you can push yourself even more, without "damaging yourself" as the brain is thinking.

Fatigue is an emotion

"I don't see fatigue as a physical phenomenon; I see it purely as an emotion. You have to understand that however bad you feel, it's actually just your brain playing a trick on you to make sure you don't damage yourself. You always have a little in reserve...".

This is confirming exactly what Loehr and many sports psychologists have been saying for many years - instinctively.

Succumbing to Fatigue is "quitting"

To hammer the point of the power of your mind in determining your capacity Noakes explains that succumbing to fatigue is nothing more or less than quitting - what we previously called exhaustion is not the ability to continue; it's basically giving up. Noakes continues

'I can show you a lot of videos where he distance at the finish nice between the first and the second runner is inches. In these cases the second runner chooses to lose, he chooses to come second. It's not that the athlete didn't have reserves. He just didn't manage to active those reserves. His brain said no because he wasn't able to convince himself that it was important to go even deeper. He accepts coming second.'

Here is an infographic with an example of a study that had the same conclusions: 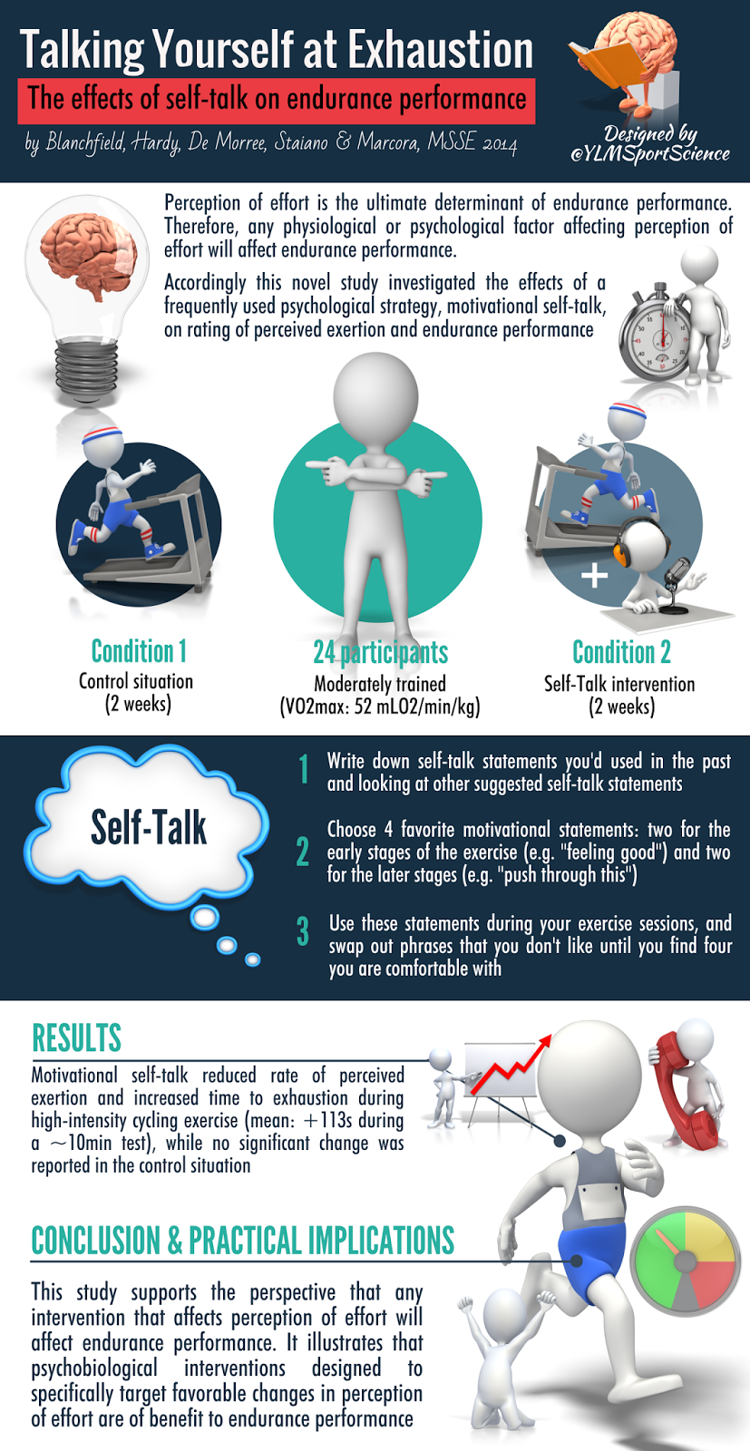 Photocred : YLM Sport Science
Therefore, the secret to pushing beyond the brain's false or premature signals of fatigue is to push through it or rather 'delay' the fatigue to a more appropriate time. Below, I've described the best method that I've encountered to push myself to the limit. This method is called "self-talk" and it involves changing the negative voice in your head into a voice of positive thinking and uplifting energy.
-----

The New Toughness Training For Sports

The New Toughness Training for Sports by James E. Loehr contains a lot of great information but the section titled the must-win battle made a large impact on my judo and life in general. In this section, Loehr explains how to conquer yourself-talk and more specifically to stopbeating yourself up. For Loehr, myself and many other athletes, this isreally a must-win battle. In this post, I'll expand on this topic in hopes of helping your get the inch you need to get ahead of your competitors. 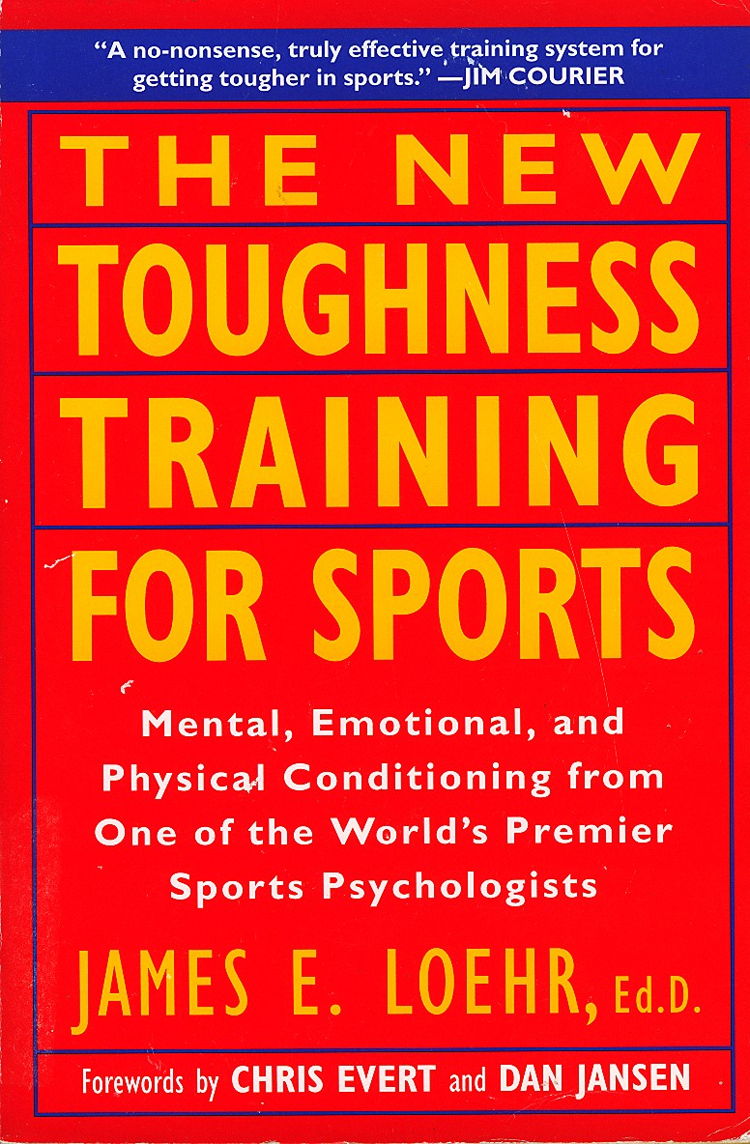 Before we take on this battle head-on, lets get warmed upwith some important definitions.

The ability toconsistently perform toward the upper range of talent and skill regardless ofcompetitive circumstances.

The importance of emotions to toughness

An important aspect to toughness is the ability to triggerIdeal Performance State (IPS) on a consistent basis. IPS is critical toperforming at the upper range of talent and skill because it involves feeling empoweringemotions such as confidence and fun. These are the emotions that fuel the performance you are capable of.
On the other spectrum, disempowering emotions such as fear,nervousness, anxiety, sadness, worry, and helplessness inhibit IPS. The reasonis that your body feels emotions as real as you would feel physical pain orpleasure. Every emotion has its own profile of biochemical and neurochemicalbalance in your brain. A shift in your thoughts creates a shift in your neurochemistry and as a result your emotions change. Emotions are simply triggers to help you understand what is going on inside your body.
These definitions were essential for me because they helpedme set goals for myself. I wanted to perform at my best on a consistent basisbut I failed to do so. However, with the information I gather, I understoodthat in order to perform well, I must learn how to trigger the emotions thatempower my ideal performance.
Loehr describes various ways to trigger IPS such as toughmental skills, strong body language and even well trained imagery skills. Thisis the same way an actor is able to make himself or herself cry when the scriptnecessitates.
The technique that really made a big difference in my mentaltoughness is self-talk. Ive elaborated a bit on the process that Loehrrecommends to make it match the process that Ive gone through.

Step 1: What you tell yourself determines how you feel

The first step in conquering self-talk is to understand thatwhat you tell yourself determines which emotions you feel. Every thought thatyou have, consciously or unconsciously, has an impact on the emotions that youwill be feeling.
Although this concept is easy to understand, it is quitedifficult to implement. The reality is that it is difficult to control our thoughts.Most of our thoughts stem of our unconsciousness, while the majority of thetime we are busy in the mental chatter created by our mind. 90% of this mentalchatter is negative and completely useless. However, the mind continues to ruleour life, creating the emotions and the reality that we see.
Therefore, in order to be able to create the emotions thatwill enable you to perform at your ideal level, you need to find a way todirect your thoughts in that direction. Below are some steps that you can take.

Once you understand that your thoughts lead to your emotionsand your emotions lead to your performance. Its time to direct your attentioninwards and listen to your self-talk and your thoughts.
I invite you to take on a big physical challenge in yoursport. If you are a fighter, get the toughest opponent you can. If you are arunner, try to run your personal best. As you are fighting or running or swimming, listento your thoughts. If you are likemost people, your self-talk will be negative, criticizing, and energy sucking.
Watch out for thoughts/statements such as :
-     Ugh, Im too tired
-     I shouldnt have gone to bed so late.
-     My toe hurts.
-     Ugh, he is just more experienced/stronger/moretalent/heavier/taller
-     I just not in the mood today, I have a headache.
This inner voice, your thoughts tend to focus on the things that are beyond your control and as a result they suck energy out of you. Instead of giving you energy these thoughts actually take energy away from you. Acknowledging this voice is an important step. It requires someintrospection. However, once this voice is acknowledged, it can be changed. Themost dangerous enemy is the one you dont know that exists. Unfortunately, many of us, are simply not aware how powerfully negative this inner voice could be.

The reason for the pervasiveness of the negative self-talkis that our mind is always looking for problems, threats and pain. Inpre-historic times, a single mistake would get us eaten by a bear - we couldn't afford to make a mistake. As a result our brains are hi-wired to look for "issues". Althoughthe times have changed, even our brains evolved, that part of our brain remainsin control.
I dont recommend to completely ignore that negativecriticism. In some cases, criticism is helping us improve our weaknesses,especially if you do write it down in a notepad after practice and take actionto fix it
However, the majority of our self-talk is completelyuseless. Our negative self talk is usually about something that is completelyout of our control - at that particular time. It is important to understand that every issue that you could have, can and will be fixed. Unfortunately it is when you need your body to be 100% is when your mind decides to focus on the "issues" that you have. Taking note of them is a great way to improve your athletic performance. However, the skill of shifting your focus is even more important. The step below will guide you to do just that.

Step 4: Turn your mind into the most powerful alley.

Conquering self-talk involves beating your inner enemyand turning it into your alley. When your mind becomes your alley, it startsto cheer you on, it gives you energy by looking for things that you excel inrather then pointing your weaknesses.

More importantly,when your mind is on your side it works hard to give you the positive thoughtsthat invite positive emotions that fuel great performance.

If this is done properly, you will immediately become twiceas powerful. And Im not exaggerating. But what do I know, try it for yourself.
Weve taken great steps by acknowledging the power of themind, ignoring or taking a mental note when needed. Now, it is time to giveyour mind direction by giving it positive statements. Here are some examplesthat work great for me, especially if you smile or have a smirk on your face:
-     Man, Imloving this, the challenge, the competition, Im made for this
-     Is thiseverything she has? Thats cute.
-     If Imtired I cant imagine how she must feel. She is about to puke, I know it!
-     One gripat a time, one step at a time, its no big deal, we got this
-     Im sograteful for this, I get to do some judo tonight, most people are sitting ontheir coach.
-     Its notkilling me, its making it tougher, I own my training Im getting better
-     Justbecause its like this now (exhausting), doesnt mean it will last, Im onlygetting better.

Loehr's book was a great way for me to learn that there is so much more to sport than just your physical capabilities. With this particular post, I hope you've noticed how much your thoughts and emotions are involved in your athletic performance. Being physically strong and talented in your sport is important but I believe it is just as critical to be able to look inside for support, to believe in yourself and to tough it out when needed. If you have any questions and comments please put them down below!